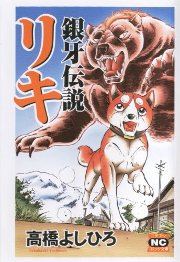 The story is about Riki, Gin's father. He was born as the smallest one in the litter of Shiro and Yamabuki. Even Gohē Takeda didn't think he could be used as a bear dog. He stayed with his mother until she was returned to her real owner. Riki cried after his mother and eventually ran away from home to seek his mother. On the way he met a small pack of rogue dogs who started bullying him. He barely escaped them and almost drowned in a river but a dog saved him. The dog was his own father, Gohē's best bear dog Shiro. He didn't recognize his son and Riki was too ashamed to reveal him being his son. Once Riki saw how Daisuke collided with a truck and fell down the hill. Not bad enough, the rogue dogs appeared, ready to bite Daisuke. Riki howled and managed to call his father and Gohē over to save Daisuke. After that the rogue dogs let Riki alone because they knew he was the son of Shiro. Then one day Gohē and Shiro went to hunt down Akakabuto. Riki couldn't help himself and went after them. He saw how Akakabuto tore Gohē's ear off and how Shiro attacked the giant bear. He did the only thing he could do and brought Gohē's rifle back to him so that he could shoot. Gohē shot Akakabuto in the eye and the bear went falling down into a ravine with Shiro still hanging on him. Shiro managed to shout to Riki that he must grow into a formidable bear hound. Pictures: